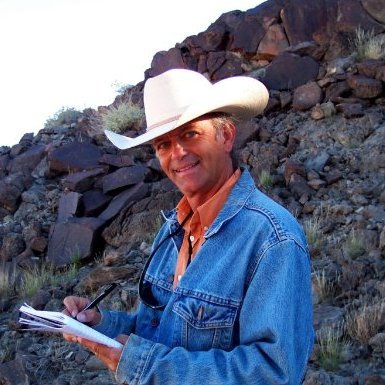 In the Gila Mountains

Description: Woody plant encroachment into grasslands and savannas is a global phenomenon with undisputed environmental and economic consequences. In central Arizona, the location of our study, it is well known that mesquite, juniper, and cacti account for the majority of the woody plant expansion into arid grasslands. Using aerial photographs (1940 and 2001), we quantified an increase in woody vegetation in this area. We estimated that from 1940 to 2001, the amount of woody vegetation at our study site increased from 559.7 ha (6.1% of the area) to 1326.6 ha (14.4%); an increase of 766.9 ha (8.3%). A GIS model which included two soil types (Rock Land and Springerville (fine montmorillonitic, thermic typic chromusterts)) with an elevation range from 1142 to 1183m and slopes from 01 to 61 is able to account for 30.3% (234 ha) of the increase in woody vegetation at our study site between 1940 to 2001. We also examined the locations of woody vegetation in relation to archaeological sites (pueblos with over 40 rooms) and determined that human activities roughly 600 year ago continue to impact the distribution of woody plants on the modern day landscape.

Publication: KIVA: The Journal of Southwestern Anthropology and History

Description: Ongoing research in the Northern Phoenix Basin has determined that the soils of at least five Hohokam agricultural fields were deposited through the diversion of silt-laden floodwaters of Cave Creek onto areas of nonarable sand and cobble desert. The fields are the result of the conscious conversion of nonarable desert lands into agricultural fields. Evidence for the anthropogenic nature of these soils based on the soil, topographic, and pollen records is discussed. The largest of these artificial deposits covers 181,760 m2 and averages approximately 80 cm in depth. The creation of these fields represents a significant gain for prehistoric farmers who were able to create arable land in locations where none previously existed. Similar soil-building technologies have been reported in the ethnographic record, suggesting that there may be a long tradition of field building in the Sonoran Desert.

Description: Southwestern archaeologists use a different set of assumptions when interpreting the presence of disarticulated human remains in the archaeological record than they do for other artifact classes. Isolated human remains reported in the archaeological literature are usually considered to have been deposited in association with mortuary rituals (e.g., secondary burials) or they are assumed to have been displaced from formal burials as a product of non-anthropogenic taphonomic processes even when no formal burials occur in the vicinity of the isolated remains. In this chapter we present selected examples of disarticulated human body parts recovered from archaeological sites in the American Southwest. These include hair, skin, finger bones, partial limbs, and skulls recovered from both mortuary (e.g., as burial accompaniments) and non-mortuary contexts (e.g., within structures or pit features) where evidence suggests that they could not have been placed by post-depositional processes or where human remains were utilized by people for non-funerary purposes.

Description: Queen Creek is a discontinuous ephemeral stream that flows east to west through the central Phoenix Basin, providing a mesic corridor from Fortuna Peak in the eastern Superstition Mountains to the Gila River. On reaching the desert floor the flow sinks into the underlying gravels and it is only under rare flood conditions that the surface water reaches the Gila River. Prehistoric settlements, including Hohokam and Salado villages (associated with Tonto Basin) have been documented along this drainage. The archaeological record includes evidence for human occupation along Queen Creek beginning in the Archaic period and continuing through the Early Agricultural and Early Ceramic periods, the entire Hohokam sequence, and the Historical period, which included Apache, Yavapai, O’Odham and Euroamerican peoples. Queen Creek Hohokam habitation sites ranged from single occupation sites to villages of several square miles in extent. Some of the largest sites, concentrated on the landform known as the Queen Creek Delta (technically an area were several alluvial fans merge), contain important features such as ballcourts, trash mounds, courtyard groups, and cemeteries ranging in time from the Colonial through the late Classic periods. In addition, recent studies have revealed that the Delta contained a ceramic production center that traded with populations to the north and south along the Salt and Gila Rivers. Other trade items may have moved along Queen Creek from the Globe Highlands to at least the western Phoenix Basin. Recent work has begun to shed light on the significance of Queen Creek in the Hohokam world, we present an overview of the mesic corridor centered on Queen Creek and how the populations along that corridor, from the Gila River at Gila Crossing to the uplands of the eastern Superstition Mountains near the modern hamlet of Top of the World integrated with peoples in the larger Phoenix Basin.