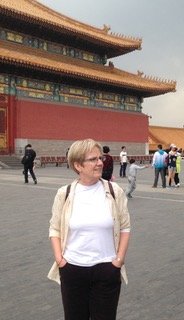 I have been a part-time visiting tutor on the Santa Fe campus for some years. I was an undergraduate in the class of SF '78 and also got an Eastern Classics degree in 2017. My husband Grant Franks and I spent two years in China bringing a St. John's-like program to Chinese high school students who were planning to come to the United States for college (six or seven of them came to the two campuses of St. John's). I have written a book about that experience, Books without Borders: Homer, Aeschylus, Galileo, Melville and Madison Go to China. In the book I describe the ways in which reading Western classics in China was both different and the same as reading them at St. John's. The hope that grew in me was that a global conversation could develop around the classic works of humanity.

The book was published through Respondeo Books, a company begun by Bob Richardson and now being run by Phil LeCuyer, both long-time tutors on the Santa Fe campus.